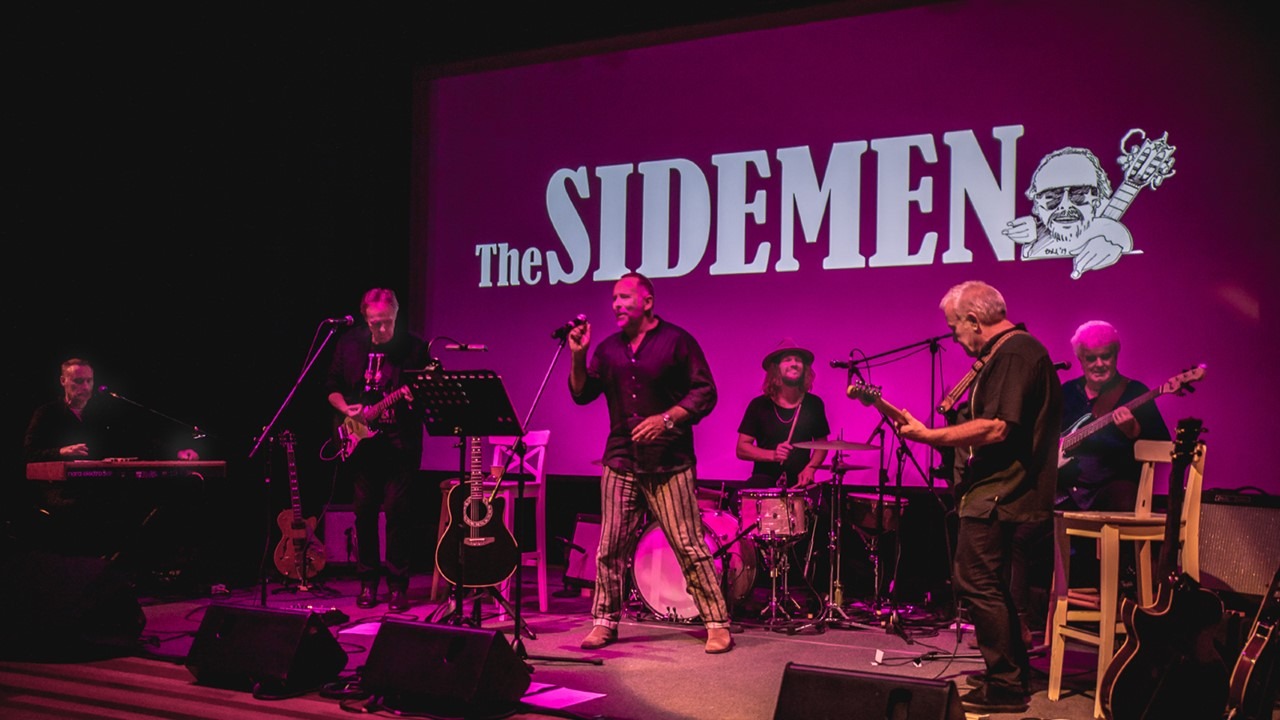 THE SIDEMEN SHOW is a program of songs chosen by each of The Sidemen - songs that first inspired them to become musicians, songs they wrote or wished they’d written.

The show was conceived by Steve Banks, a Byron Bay local, after a conversation with man-about-town and bassist Greg Lyon, at one of Greg’s local Hip Operation gigs.

Steve is creative director and ‘rear guard frontman’ for the show. “I went on to tell Greg of my wistful desire to do something like Daryl’s House (an online show featuring Daryl Hall and guest performers with the House band) around Byron. He listened patiently but wasn’t convinced. ‘Why would anyone come to see an old player like me?’ he said. ‘I’m just a sideman..’ ”

It was then that the penny dropped for Steve: “Well I would, and so would a lot of folks I know.” The notion of a House band and the freshly minted Sidemen coin came together right then.

“I was super enthused and I think some of it rubbed off on Greg. He said, ‘as long as we don’t take requests for Ed Sheeran songs..’ ”

Further serendipity brought the rest of the sidemen together for a marquee party in March of last year. Greg found drummer Grant Gerathy (ex-John Butler Trio) while Steve brought his two confederates Jeff Burstin and Bruce Haymes up from Melbourne. Home on r&r, world-tourist sideman Rick Fenn came in on guitar.

“We all enjoyed it immensely” says Steve. “There was a chemistry there and I was pretty sure we’d chanced on the ideal lineup for the Sidemen show. Anyway, the concept has percolated for a while now. It’s time to tell their story.”

The band’s credentials blow up a perfect storm out of Jo Jo Zep and the Black Sorrows, 10CC and the John Butler Trio, jazz-rockers Crossfire and the Bachelors from Prague plus backup for the likes of Renée Geyer, Archie Roach and the Bull Sisters, not to mention Georgie Fame and Jack Bruce - and that's the short list. These guys have played around and around, on stage and record, and won’t be stopping soon; but it’ll take their rearguard frontman to tell their story. “Shining the spotlight on these blokes might cause some gratuitous foot shuffling,” Banks muses “but they need to suck it up and take a bow.”

Playing favourites, Steve & the Sidemen are heading for Melbourne. The Hornets will play on; so will the Feramones, Greg’s Hip Op and Grant’s Trio - but The Sidemen are a rockin’ proposition.. a whole lotta Oz with an English thing, ready to testify and having way too much fun to leave it at ‘one night only’.

Peace and love to Ed Sheeran.