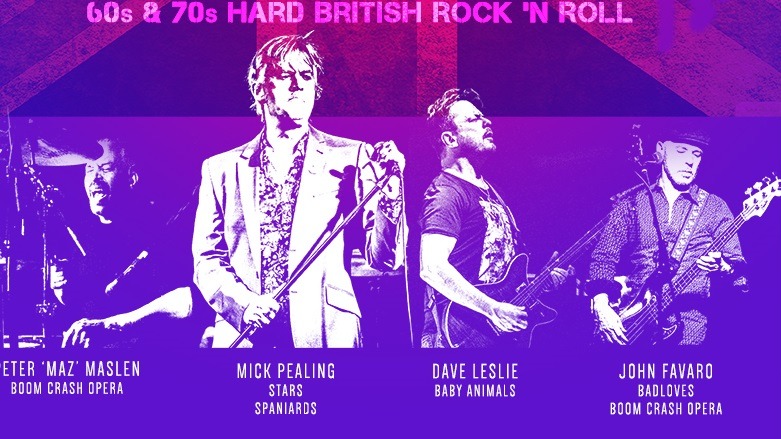 No sooner had Bob started the riff to “Bad Boy For Love”, when Baby Animals guitar player Dave Leslie stepped in, turned up his amp to 11 and smashed out the British favs from the 60’s and 70’s with Raw Brit.

“Dave has been an invaluable replacement for Bob, he just gets it.” says drummer Peter ‘Maz’ Maslen. “Boom Crash Opera and The Baby Animals toured together back in the day and I knew I’d play in a band with him, it’s very, VERY exciting”.

Now with a few Raw Brit shows under his belt, Dave is more at ease having to fill Bob’s shoes and recalls “I could not believe it, the very first song I played with these guys was like I put on my favourite old pair of jeans.”

Formed around 10 years ago by Mick Pealing (Stars) and Bob Spencer (The Angels, Skyhooks, Rose Tattoo), along with John Favaro (The Badloves) and Peter ‘Maz’ Maslen (Boom Crash Opera), Raw Brit saw an immediate following with sold out shows.

“This was the single greatest time in music history!” infers lead singer Mick Pealing, “Bands were paving the way for a generation to follow and they had nothing to lose!”.

The swinging 60s saw Britain (and the world) undergo profound cultural change never before seen in modern society, the historic significance of this period is well documented in the music Raw Brit perform.

Bass player John Favaro recalls being caught up in zeitgeist: “There was anger, anti-establishment, drugs, booze, thieves and dodgy deals .. and there was also a bad side”.

Because Raw Brit members spend their busy professional life in their ‘main’ bands, it's a very rare and special occasion when they get to play the music that influenced them.  It makes this incredible line-up a must see for every British invasion enthusiast!