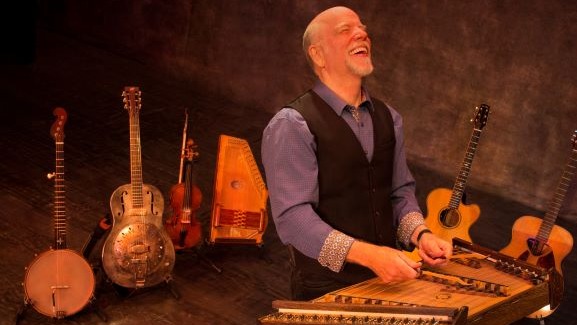 Acclaimed singer-songwriter, instrumentalist, author, activist and multiple Grammy nominee, John McCutcheon returns to Australia in 2020 for a whirlwind series of festival and concert engagements. He appears at Caravan Music Club on Sunday March 1.

John McCutcheon is a powerhouse of song, story and music that inspires and excites.

"The most impressive instrumentalist I've ever heard."

John McCutcheon has emerged as one of the most respected and loved folk/ contemporary artists of the post war generation .

As an instrumentalist, he is a master of a dozen different traditional instruments, most notably the rare and beautiful hammer dulcimer. His song-writing has been hailed by critics and singers around the globe and his 40+ plus recordings have garnered every imaginable honour including multiple Grammy nominations.

His exploration into the legendary figures of traditional Appalachian music and activists (Joe Hill, Woody Guthrie & Pete Seeger) embedded a love of not only home-made music, but a sense of community and rootedness. The result is music...whether traditional or from his huge catalogue of original songs...with the profound mark of people and place plus a storytelling style that has been compared to Will Rogers and Garrison Keillor.

Despite his myriad recordings, it is in live performance that John feels most at home. It is what has brought his music into the lives and homes of one of the broadest audiences any folk musician has ever enjoyed. People of every generation and background seem to feel at home when John McCutcheon takes the stage, with what critics describe as "little feats of magic," "breathtaking in their ease and grace...," and "like a conversation with an illuminating old friend."