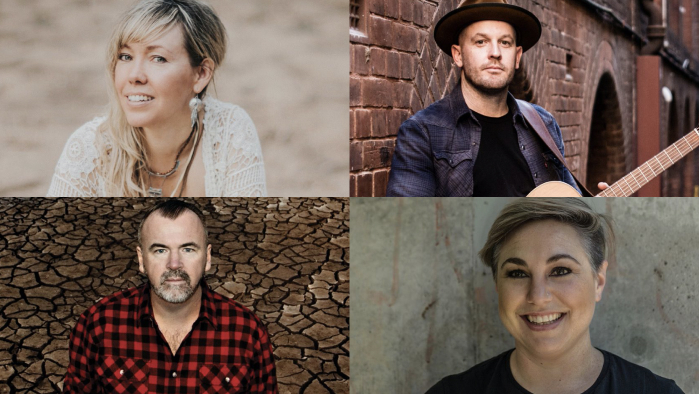 This is a ONE NIGHT ONLY show featuring 4 extraordinarily talented artists.

Felicity Urquhart’s Golden Guitar Award tally now sits at fourteen after talking out 5 at the 2020 CMAA Awards for her seventh solo studio album ‘Frozen Rabbit’. The album was also nominated for a 2019 ARIA Award in the Best Country Album category. These accolades acknowledge the strength of the album, Felicity’s first stand-alone album release in over a decade, and her first since signing a new record deal with ABC Music.

Brad Butcher won the 2020 Golden Guitar Award for ALT-COUNTRY ALBUM OF THE YEAR for his 2019 release, ‘Travelling Salesman’. Butcher’s mix of country, folk and blues, brings some different toughness to the sound, and highlights his ability to write about families, the natural world, and something close to his heart, mental health.

Michael Waugh’s songs peer unflinchingly into the lives of those who have faced misogyny, homophobia, illness, violence and mental health in Australian rural communities - but the stories are lovingly depicted, evoking striking images of funny, real, beautiful, strong and flawed people. They are deftly balanced with humour, hope and lightness - textured with Australian vernacular and detailed with idiosyncrasies of specific places and people.

Melbourne songstress’ Gretta Ziller’s roots span jazz, blues, rock, pop and classical, and that eclectic musical upbringing is reflected in the varied tracks on this new collection. Her songs are often inspired by emotions rather than common trials and autobiographical tribulations.